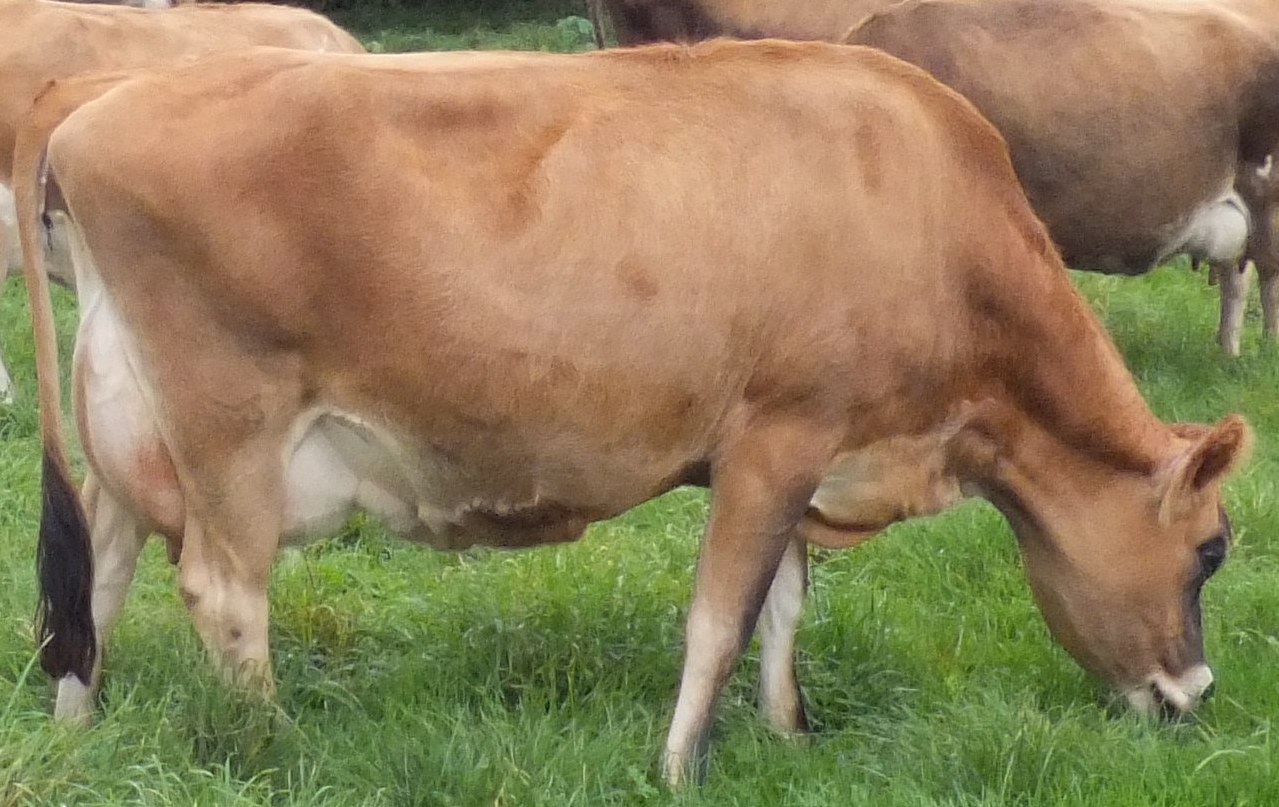 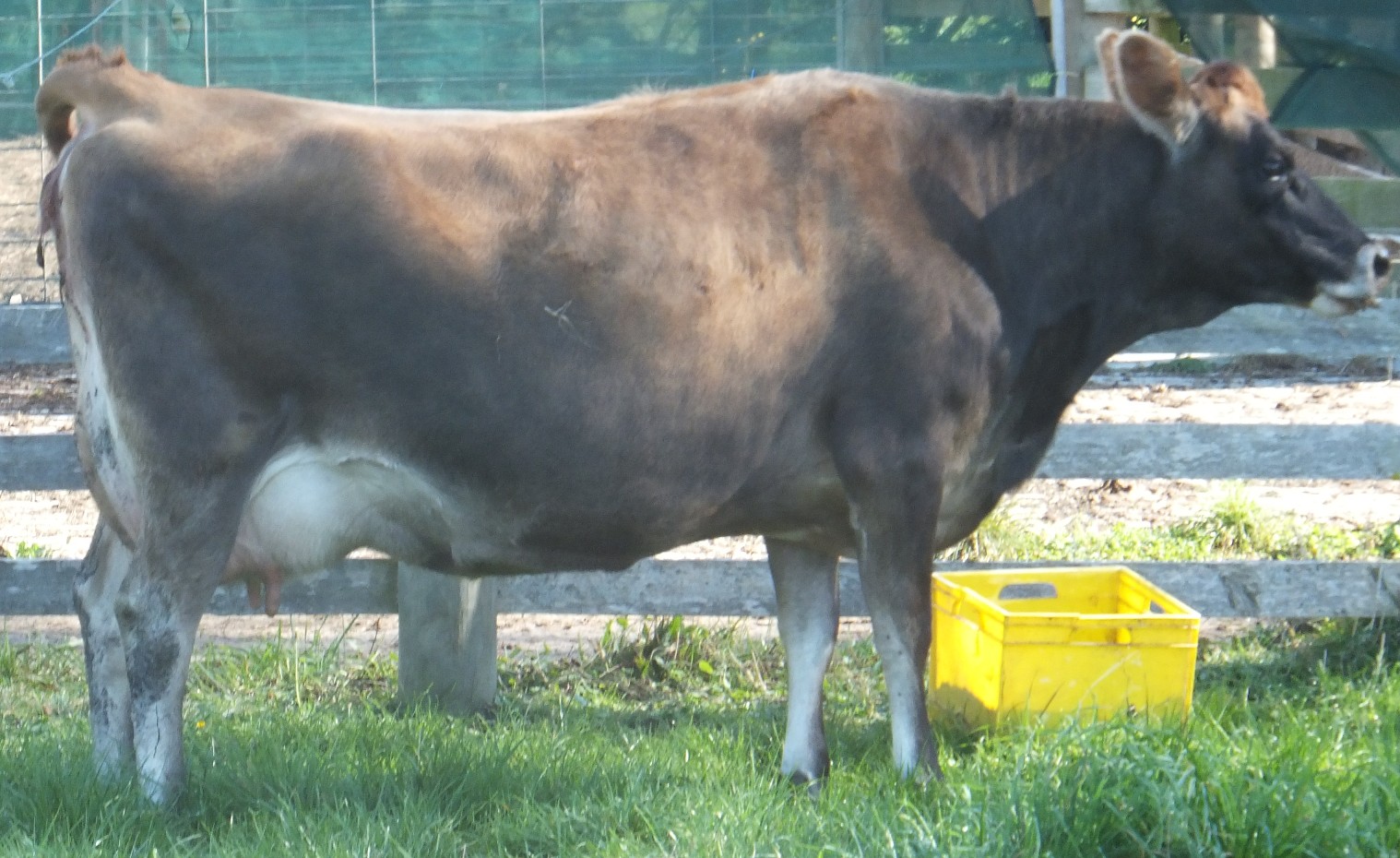 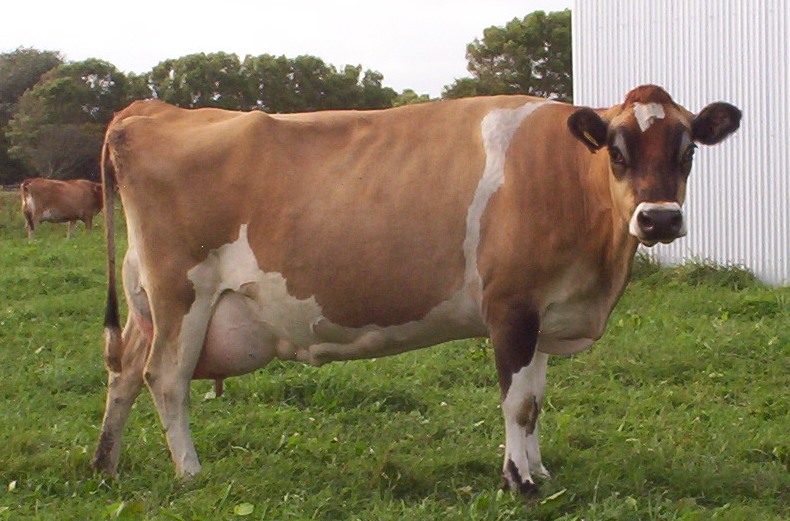 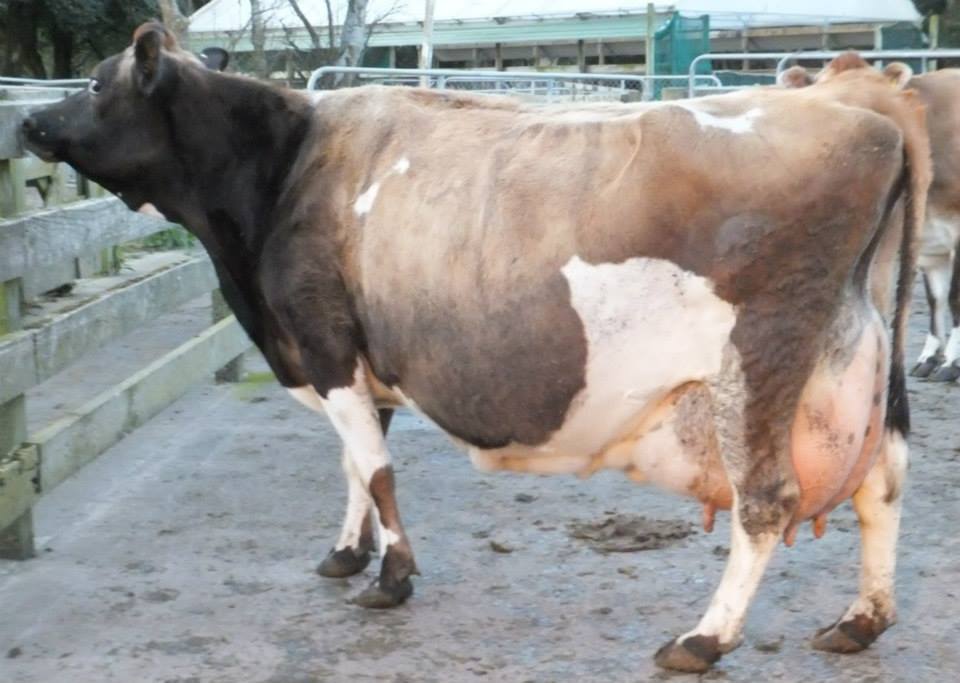 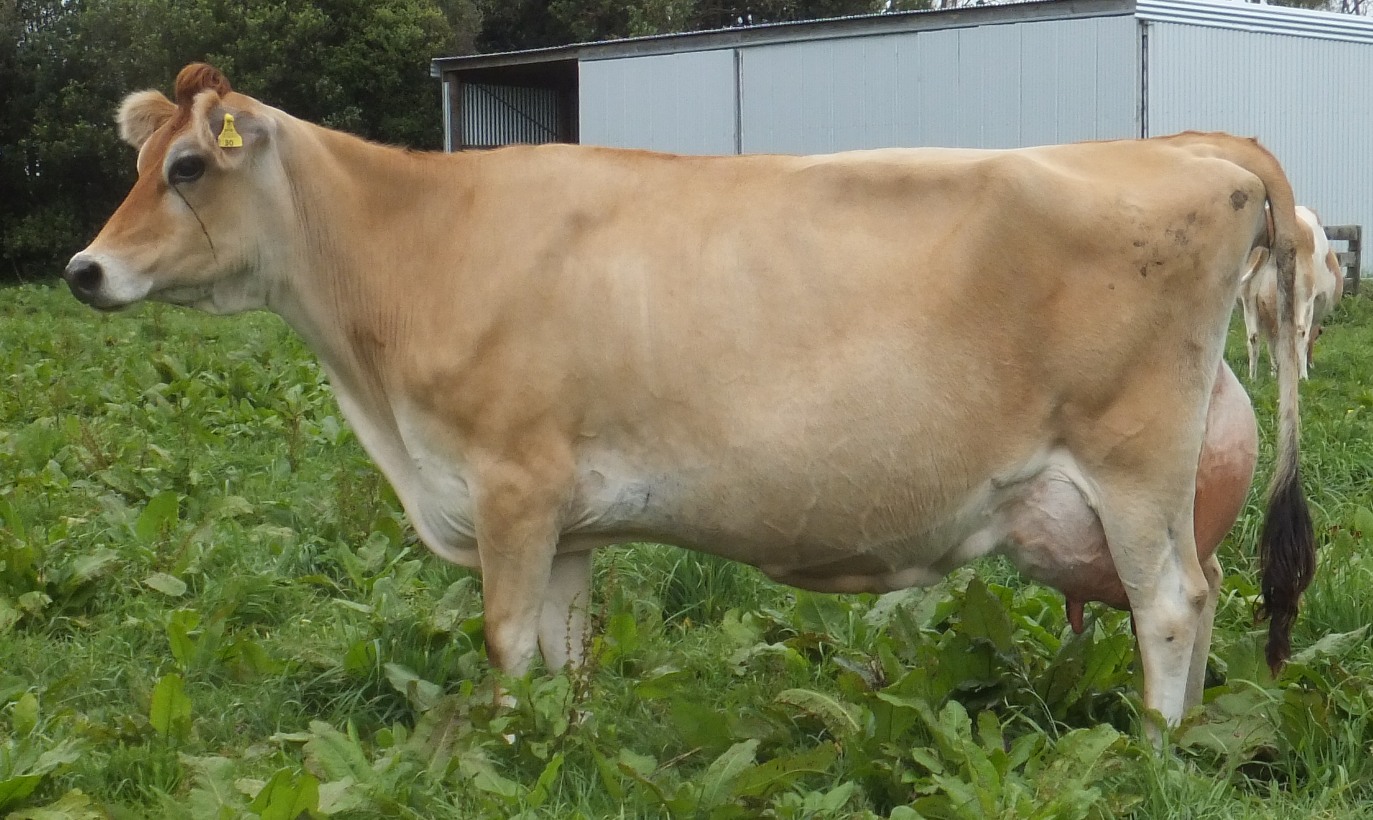 Highest ever fat at Glenbrook. 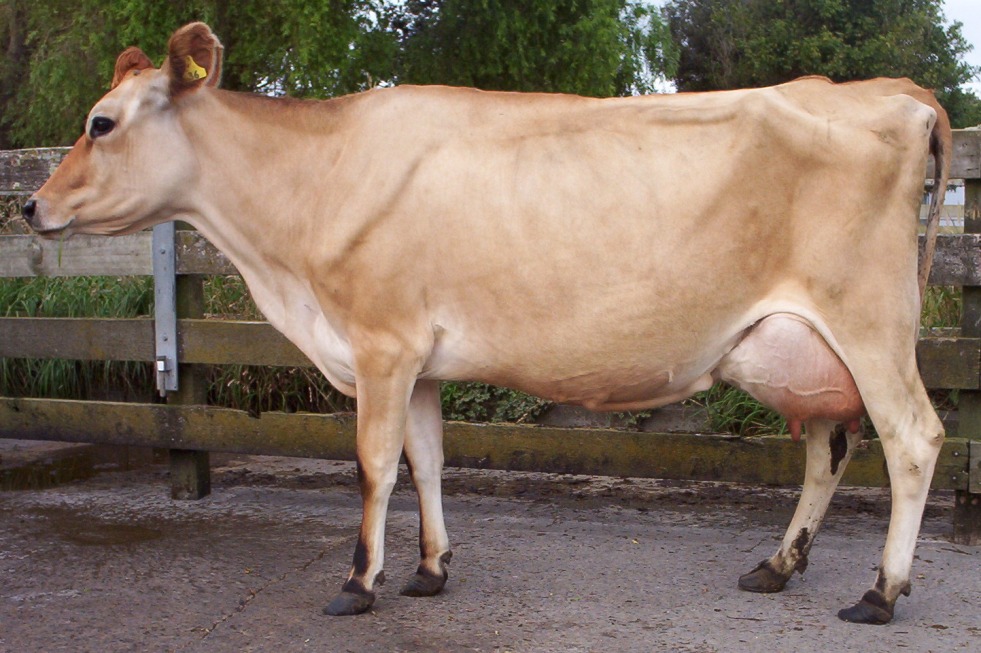 Highest ever milk at Glenbrook.   Milked to 41.1 litres in spring at 3yrs.

First and so far only 12,000 litre Jersey cow in New Zealand 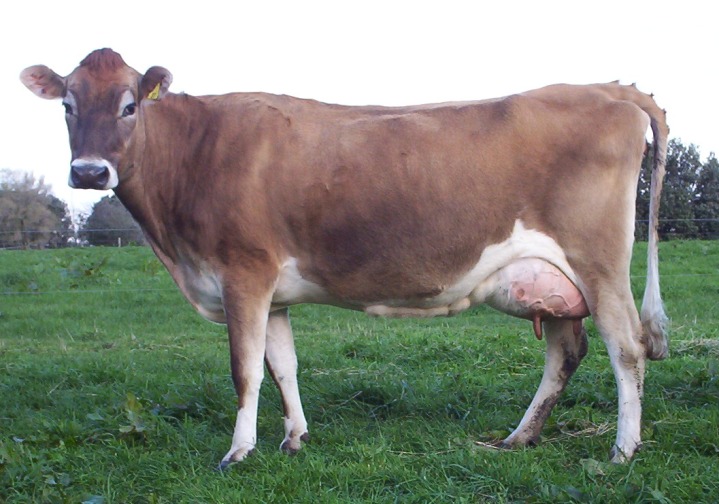 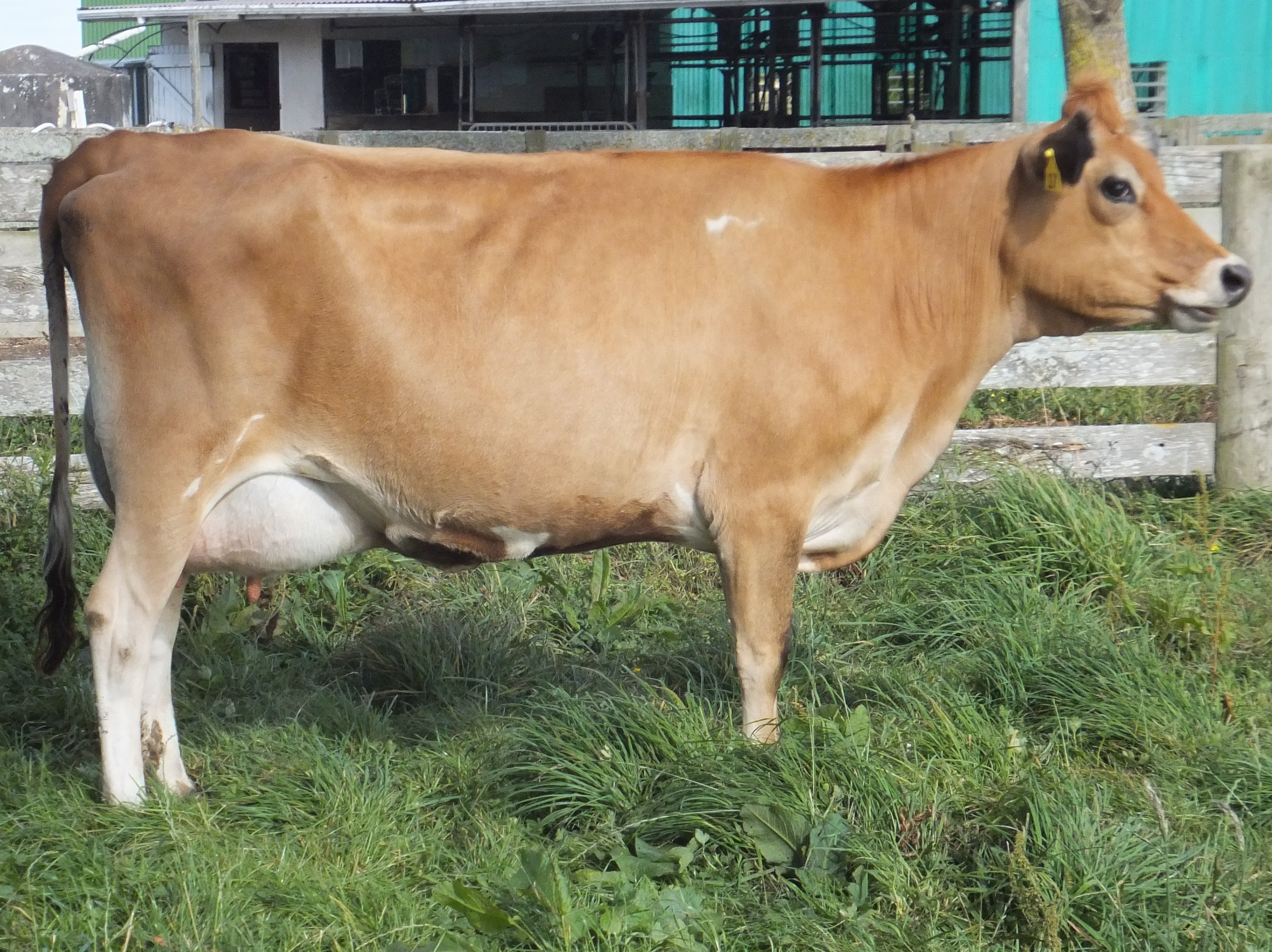 The breeding of better dairy cattle is an art as well as a science. The art of breeding cattle is both the inborn and developed sense of judgment as to which animals to mate to each other with the hope of anticipated results. The master breeder may not always be able to tell you all the specific reasons why he makes certain mating's which may result in individual offspring superior to their ancestors. However, his ability to make such mating's stamps him as an artist just as truly as the masterpiece marks the master painter. By intelligent and skilful selections and mating's , he puts together both the known and unknown factors of inheritance in such a way as to sometimes create animals of greater worth.

A review of the history of the breeding and development of better livestock, reveals that the most successful breeders, the ones who have made some definite and lasting contribution to breed improvement, have almost invariably achieved success through a program of close breeding of related animals. They have practiced line breeding and in breeding to intensify and strengthen the desired character and abilities which the parents possess.

The object of these mating's is not alone to establish the character of the immediate animal produced, but also the development of "breeding power" which will carry on for successive generations and which will dominate over the character of other lines of breeding when out cross matings are made in one's own herd or in the herds of others who purchase our cattle.

Now, no one has a greater appreciation than your author of the absolute need of finding, through records of production, just what is the apparent breeding worth of our animals. Yet, having established the productive and reproductive worth of our cattle, then our policy of mating such animals should be guided by the past history of successful breeders, many of whom achieved improvement without the complete production records that we demand today. Many cases could be recorded of the failure of breeders who have simply mated production with production, without regard to the principles of the relationship of blood lines, and perhaps many more failures will be recorded by promiscuous mating of reproduction with reproduction, as indicated by indexes or formulas, of whatever we call them. Down through the pages of the history of livestock improvement, we find the most genuine contributions have been made by a relatively small number of outstanding animals in the hands of a few master breeders who have invariably intensified the blood of these great breeding animals through close mating's of their offspring.

Please feel free to copy and/or print off any of the information on these pages for your own interest.

Please email us with any further records that you know of that are not on this web site especially the NZ records section.

Welcome to our web site. We hope you will find lots to interest you here.

and other available sires Updated FEBRUARY 2012

Rainfall at GLENBROOK over the past 50 years Updated monthly 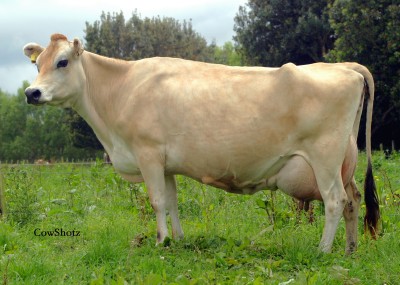 One of the great breeding cows at GLENBROOK, her linebred son GLENBROOK CONDUCTOR has semen available.

He is the sire of Glenbrook Camboge our new star sire.

HALL OF FAME at GLENBROOK

2004-05 news and production at GLENBROOK

Also a list of herds in New Zealand that have averaged over 10,000 lb milk average (4405 litres milk)

Click here for HALL OF FAME cows at Glenbrook.

GLENBROOK has Won the PIONEER trophy ( 14 times to date )

for top herd under 100 cows in new Zealand in