Herd tests for this season. ( In RED is record for any year )

GLENBROOK wishes you all a happy new season.

Calving all over with last one in this morning. Sold most of the calves this season to make it easier for me. Have reared 4 heifer calves and 3 bulls. This months herd test is a little better.

Of particular interest is Case milking the 5th heaviest ever on a herd test day at Glenbrook.

Been a hard few months with a broken arm 10 weeks ago so basically just been in survival mode till I can do things again. We had the tornado go through the farm and lost about 100 big 25 plus year old trees including a complete line of pine trees. No power on farm because of so many fences down and the cows learnt the subtle art of break feeding. They break the gates and feed themselves. Had no water for a couple of days and also coincided with no pellets for 6 days. Needless to say it was a little stressful and they got down to 11 litres a cow for a few days. With me out of action it also meant that the cows got milked by 9 different people in 4 weeks which at least proved their temperament as they really took no notice of whoever turned up to milk. The July test was very disappointing [ lowest for years for any month ] but considering everything as good as could be expected except for the fat test. Herd test was a 6.2% for fat and a 7.0% for fat at the factory on same day. Despite my querying this they wouldn't alter the fat test for the herd test. The herd home is not working yet as it appears my cows feet are smaller than anyone else's and they need to make up some new grating so I can put cows in there. Could certainly have done with it with the weather lately.

Upgraded a lot of pages today.

See HIGHEST FAT & PROTEIN RECORDS at GLENBROOK  for new records from this season.

Finally got to winter here.

Herd average for 2006-07 is second highest ever here at

Herd home is nearly complete. Had a very interesting visit from Charles Wallace ( Medicine Bow jerseys - USA ) who stayed here for a couple of days. I went up to the Northern Wairoa sale in Northland for the first time. It was great to go up there and also visit the Boulevard and Lochnoor studs and spend some time with Ned Stirling ( Big Hollow stud ). Also delighted to show the herd off to Jim Conroy from Semex and Kenneth Byskov from Dansire ( Denmark ) with Neil Cooper of WWS. Had a number of other visitors but mostly to check out the herd home. Purchased my first Jersey for several years at the Whitimore dispersal sale being the outstanding cow in

She is home now and seems settled into the routine here. We look forward to milking her. The weather here is still summer like. No rain, no grass, lots of flies. Its been very dry all year and that hasn't helped the cows production. Milking 85 cows at present, easily the most ever here. Cows are loving the procow30 feed. May herd test with a few new names in top producers. 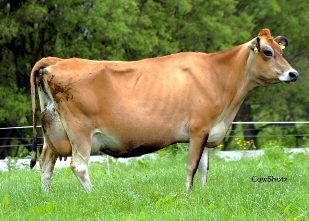 All Autumn cows are now calved. We had 47 cows calve for 30 heifer calves and 20 bull calves. 3 sets of heifer twins. Now milking 83 cows which is the most ever milked at Glenbrook. Just started feeding Procow30 in addition to plenty of silage. The herd home is not far of being completed. We just need a day without wind to get the roof on and a bit of concrete around the sides.

This is a new record for 365 days fat at GLENBROOK

The most awaited calf this autumn was born this morning.  GLENBROOK NORTHERN COLD by Tahau Northern Exposure out of Glenbrook Commando Cool EX2. A beautiful heifer calf. We were due to start calving today and have 7 in already. Other news includes a Herd Home to be built at Glenbrook hopefully before the winter. February is proving to be one of the driest months on record here with only 14mm of rain so far this month and not looking like much more for a while. Started feeding silage to the cows today.

A new herd manager has arrived at Glenbrook. We are delighted to welcome Maxine Neal from North Queensland, Australia. Maxine is well known as Jerseygirl in Australia and was a big part of the recent Youth Camp and IDW. Maxine won the 2007 Best Overall Student Award at the youth camp.

Had nice ( but wet ) visit from two US breeders in Doug Martin & Bill Patterson. Among other things I found out that one of Coasts sons is registered in the US as GLENBROOK OCEAN CHEESE and semen has been collected from him. The page we wanted to used for their visit was here .

A very interesting page to visit is this one from the US. 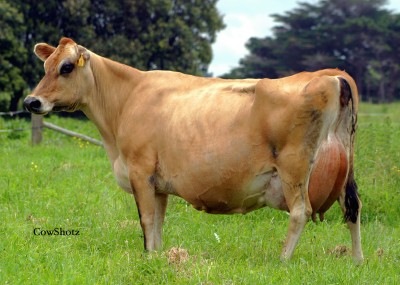 Good herd test for Jan of 2.03 which is just behind the January record of 2.04 set in 2006. Couple of cows made the record daily lists here

Added a few photos to Glenbrook Genetics. Happy New Year to you all.

New record for a December herd test at Glenbrook.

Notice that the 9 Glenbrook cows above are all line bred. Citron is out of Corvette and looks like following in her dams hoof prints. 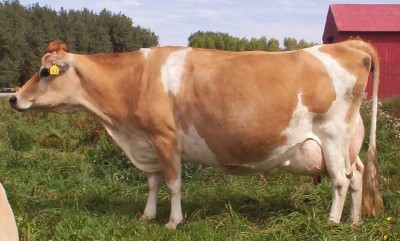